Book Review: Arrival (From The Sky #1) 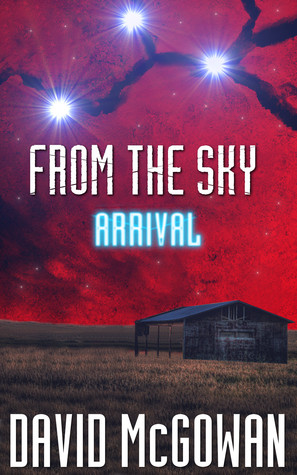 When the ground starts to shake beneath their feet…

When the noises crash through the skies above their heads…
When the giant UFOs appear and send down their beams, their terrible beams…
Everything changes in Camberway, as a series of bizarre events changes all of their lives, forever.
What will become of Camberway, and the people who call it home?
Will anyone survive? Why are the giant UFOs here? what do they want?

Arrival is the story of survival of a group of people from an alien invasion. This group has people from Camberway, a small fictional town in California, somehow having their lives related to each other. Everyone has a tragic past of their own. The characters are written very creatively which makes reader feel connected to them. The aliens invade with 3 majestically large UFOs, with their fancy lights and lethal beams. Nothing much is revealed about these ETs except for their human like appearance and red eyes. More of these UFOs and Aliens would have been better. The overall plot was good because of the mysteries created which would make reader curious all through the book. Although, I was disappointed at the end because not many of these mysteries were answered. The book had just the events happening like in AMC’s A walking dead. The group moves from one place to another for safety and that’s it. I was expecting answers to few mysteries to get grip over the series. The second installment desperately needs a ‘Revelations’ chapter. The basic mysteries were never revealed like What was their purpose of invasion? Why did they interfere with Luke’s (One of the characters in the group) personal life? How Earl Buckley (A psycho killer) did escape mental facility with no trace at all? Why did aliens kill so many birds? Yes, they kill all the birds. For about 30 minutes, there are dead birds falling all over the Camberway. Wonder how there are so many birds in Camberway?

I like the characters and their twisted pasts. My favorite character was Mirlo, a red-head, 23 year old, troubled girl. She is out with her geek friend Deke camping and smoking joints when they find 8-year old kid Tucker. After that she considers Tucker as her responsibility and acts as a mother like figure to little Tucker. Also, Deke the Geek is pretty much in her friend-zone. So that makes her a great combination of smart woman and a jerk.

A lot of dead birds. And a couple of side characters. No major kills. Nothing fascinating in this section.

The writer started off rather creatively, when the characters were all in still their developing phase. The problem started when there were too many characters all at once. It’s really confusing to make out who is talking to whom because of switching of Point of view between characters. The narration on the whole is fine enough for a reader to imagine this fictional world and fictional story as real.

The beginning is all about characters and their stories. No UFO encounters until the end of first chapter.

Ending is great. It is more like a teaser for the sequel ‘Journey’. The ETs contacts 8-year old kid Tucker, and tells him to move towards the desert. Another mystery created at the end. The disappointing and frustrating part is, too many mysteries and none answered.

The unsatisfying part is the questions asked in the blurb.

None of these questions were answered along with many other questions. Maybe the same blurb could be used for sequel as well.

You can also read this review at Goodreads and Amazon.

Opening Line: “Evanson, you are full of shit”

Final Thoughts: Do not read if you are expecting something epic.