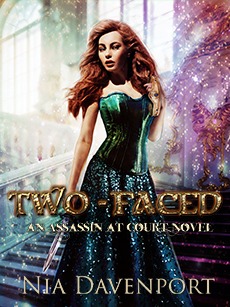 Skyler is a teenager and a girl so she’s used to being underestimated, which is just fine with her. It makes her job that much easier. Her targets never see her coming. As Anthame’s most deadly assassin, her survival depends on her anonymity. To keep her identity hidden she hides beyond layer after layer of false masks. When Skyler is given the Crowned Prince of Anthame as her next target and instructed to make the kill as quiet as it is inconspicuous, she must travel to the royal city of Pleith and embed herself deep within the King’s inner court and the life of the Crowned Prince. At Court, Skyler quickly learns that all is not as it appears, and as she worms her way into the Prince’s graces he warms his way into her heart. Her unwanted feelings for the Prince threaten to expose her for who she really is and send her carefully constructed walls of deception crashing down around her.

This is a really fast paced story and predictable. That being said, I loved the story. I am a sucker for romance. I just can’t help myself. I read this book in almost one setting. I devoured it.

Skyler is a teenager with no family and she is also the top assassin. Everyone comes to her when they want someone killed. Her newest job is the Prince, but things don’t go as smoothly as she thought it would.

Skyler makes her way into the castle and it is almost love at first sight, for the Prince, and Skyler doesn’t take long to follow.

At first I had a hard time believing a 17 year old could possibly become a high paid assassin at such a young age, but after hearing her back story I could kind of understand it.

I do have a few issues with the story, like how it felt like the setting was medieval times, yet the language and the characters way of thinking was more new age. I felt like the author never really decided the time setting of the story, or didn’t research enough of the era she wanted it to be set in.

While there were a few issues I did thoroughly enjoy the story.

I feel as though I really get to know the two characters, Skylar and Zander. They were very easy to love and cheer for when things got rough.

Again, this is where an issue arises. I felt that it was a little confusing to remember what era this story was written in. It also seemed like the novel could have had one more run through with an editor.

I was skeptical at the beginning, finding it hard to believe a 17 year old could be one of the top assassins.

Loved the ending so much. It ended in a way where I could consider this a stand alone, but it left it open for another novel, which I went looking for the moment I finished the book. I will more than likely read the second book.

To be honest, the cover had a lot to do with why I choose this book. You will find that it happens a lot with me though. I just love a beautiful cover!

The blurb was the deciding factor in reading this book. It is perfect for the story.

Opening Line: I hid behind the dark tapestry until the girl left. My assignment was to take out the loathsome creature that paid for her services for the night, not her. (The second sentence was stronger than the first)

Lowlights: The time period of the story is a little confusing.

Final Thoughts: I can’t wait to get my hands on the second book.

2 responses to “Book Review: Two Faced (An Assassin At Court #1)”