Word Of the Week (WOW) is a weekly meme created by Heena Rathore P. (me.) It’s a fun way to improve one’s vocabulary by learning new words every week. If you want to participate then simply do a post with your WORD and leave the link to your post as a comment on one of my WOW post. 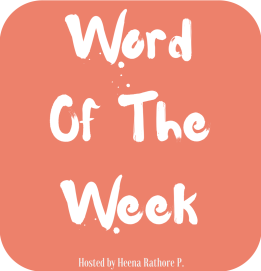 Here’s the WOW for this week :

I hope you guys like this word and hope it’s useful to you in some or the other way! If you want to check out more words like this, then visit my page:

Heena is the author of the award-winning novel Deceived. She works as the novel critic and the chief editor at a local publishing house in Pune, India. She is an animal lover as well as an animal activist. She loves books, music and wine. Travelling and learning about new cultures is an integral part of her life. She is presently learning Piano and French language. She lives in Pune, India with her beloved husband and 6 cats. View more posts